The Chess Olympiad is getting more and more interesting and we observe many exciting games on the top boards. There are 11 teams in the open section and 12 teams in the women’s section who all have won their first three matches. The biggest surprise so far was a draw between Ukraine and Norway 2 in the second round.

Round 3 of the open section brought some very equal matches in the top and five of them finished with 2-2. The most interesting results were France winning against Armenia and Holland beating USA (see below for a picture from this match with three world class players – Gata Kamsky, Hikaru Nakamura and Anish Giri). The hosts with Magnus Carlsen on the first board can’t be satisfied so far. They won with only 2.5-1.5 against Yemen and then made four draws versus Finland. However, after winning in round 3 they are higher in the standings than Armenia and Ukraine. There are 8 rounds to go, so anything can happen. The next rounds will for sure bring more emotions and fascinating games. The most interesting match in round four is definitely France – Azerbaijan. 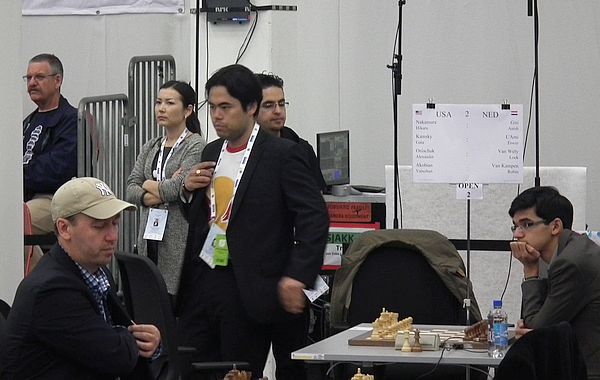 Thanks to the live broadcast of all the matches we can also observe the fight on the lower boards. I’m in Tromsø as the captain of the Maltese team. For me on of the more interesting bets on Chessbet.com therefore was if Malta or Cyprus will place higher in the final standings. So far both teams are doing well. Cyprus has two wins, Malta one win and one draw, but 2-2 against Yemen should be considered as a good result.

Every single match even on the last board might be interesting and inspiring. Every team has some aim and every player tries to get the best possible score. That makes the Olympiad the most interesting event of the year. Enjoy watching the games and don’t forget to bet!